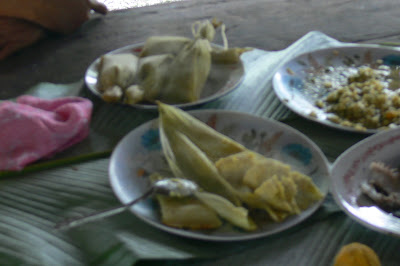 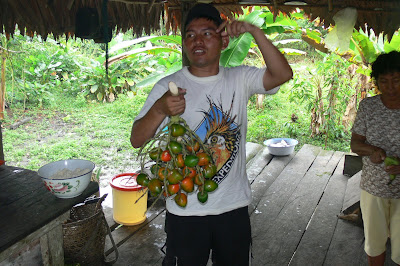 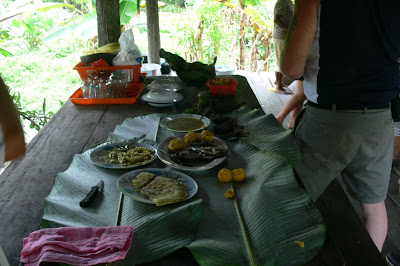 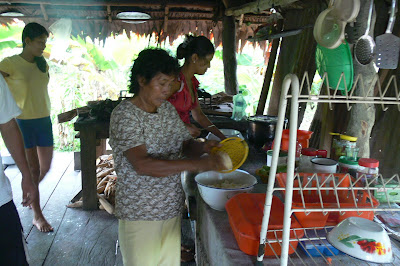 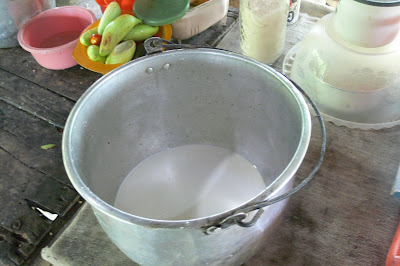 The main staple here as in other parts of Amazonia is yuca, also known as manioc. It is a primary source of both food and drink. It is included as a part of every meal. In the kitchen some other dishes might include:

Fresh salsa eaten with the fruits of the peach palm and “Jungle Bread” also known as “beshu”- this is made by squeezing the juice from the yuca and grinding the yuca, shaping it into a pancake and frying. It looks like a pancake or large, fluffier tortilla.

Bananas and platanos are the other primary food sources, though they are not native to the area. Bananas are roasted and mixed with pork or eaten as a desert of sorts, or sometimes made into a refresco.

Cocona is a type of fruit, they look like a tomato, are in the tomato family and are bitter tasting. (The juice can also be used to condition your hair and to alleviate mosquito bites, but it burns and itches terribly for the 1st 10 minutes it is applied, then after you wash it off, no more itching!) Leaves are also used as a sunburn remedy and for snakebites.

Larva soup is called “maza morra de suri” and you can also make this soup with out the suri and use plantain instead (or whatever else you have on hand!). The suri or plantains are sautéed and added to a soup with yuca, garlic, salt, pepper, fish or chicken, soybean oil, maybe carrots and let to simmer for an hour or so. Very tasty!

“Tacacho” is salty banana, a little dumpling made of bananas that looks a little like a potato pancake.

Macambo were roasted seeds that tasted a lot like pumpkin seeds and were served on a skewer.

Mingado de Platanos is made from sugar or honey, smashed plantains, and cream or evaporated milk

Chapo is a juice made from bananas (“Chapo” is a dialect work coming from either the Yagua or Bora natives). You chop the bananas and boil them for about 30 minutes, then cool, remove from water and mash. Don’t discard the water, because after mashing and cooling you add the water back and stir. You can add milk or cream and drink!

Refresco de cocona
When cocona is red or orange it has reached ripeness, you pick it and boil it in water. Then squeeze out the juice, add some water and sugar to taste.

Usually found living in the Aguaje palm, these larvae can grow as large as your thumb. They are eaten throughout the Amazon river basin because they are reputed to be an excellent source of protein and are easy to obtain. In addition they are tasty, can be slightly crunchy outside and smooth and creamy inside. You have to remove the intestines prior to eating.